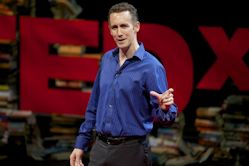 From your posture to your hand gestures - your body language speaks volumes about you. Richard Newman reveals how to improve the impression you make and how to read the body language of others

Face-to-face meetings happen less frequently in the digital age. We can work closely with colleagues, contacts and even clients using email, phone and cloud apps without needing to meet up in the "real world".

But body language in business is actually more important than ever, says Richard Newman, director of UK Body Talk Ltd, specialists in communication skills for business. We meet people less frequently and face-to-face meet-ups can be critical.

"You often don't have to meet another human being. So when you do meet face-to-face it really counts," says Richard. "You're not meeting to get information (you can send that in an email); you're meeting to change the way the person feels about that information - using tone of voice and body language."

But the impression that we make is usually subconscious. "Most people are largely unaware of the impact they are making," says Richard.

There are also a lot of misconceptions about body language. "People say, don't fold your arms and don't put your hands in your pocket or don't cross your legs," says Richard. "But these are things you do consciously. The really important signals tend to be those you do unconsciously."

So why should we actively focus on our body language? "It's not about being someone you're not," says Richard. "It's about having a professional version of yourself. Everyone has a different style. Body language training helps you match up techniques with your authentic behaviour. Above all, it's about showing warmth and approachability."

So what can you learn about body language to improve your personal impact? Here are Richard's six key lessons:

When people stand up to talk, they are often unaware that they are swaying. It's like a child being rocked to sleep. But when you sway, the effect on the audience is like a pendulum, it can be hypnotic and the audience can lose track of what you are saying.

Men tend to rock, while women often rest on each hip in turn. Being lop-sided like that makes you look vulnerable - in fact, you look like a pushover. Standing up straight gives you more gravitas.

When you're in a tricky negotiation, it can be hard to know when to keep pushing and when to settle. Watch the hands. If the person you are negotiating with makes gestures with their palms facing down, that's a closed and dominant position. It means they won't budge anymore, so stop pushing. But if they have their palms facing up, even while they are saying that this is their best offer, then you can keep on negotiating.

Use the palms up gesture yourself if you want to foster a spirit of collaboration and achieve a win-win outcome. Palms down is not always a negative gesture, however. If you are talking to an employee or a supplier, for instance, and they use this gesture while they say they can meet your deadline, then they are showing their determination to deliver on time.

With eye contact, there's a three second rule. If you hold someone's gaze for longer than three seconds, you enter a situation known as "kiss or kill". Longer eye contact signals one of two things - either you are attracted to the person or you want to attack them.

Eye contact patterns are different between the speaker and the listener. When you are listening, you should look at the speaker about 80% of the time - to show them that you are being attentive. The speaker should look at the other person about 50% of the time. When you're not making eye contact, it looks best if you look up and around rather than down - which comes off as introspective. Looking around also gives you space to think about what you want to say. 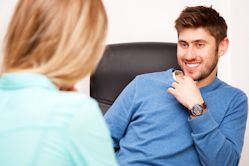 It's a myth that touching the face means someone is lying. It can indicate a lie - but generally, face touching shows a level of anxiety and a heightened activity of the mind. In a sales pitch, for instance, it could show that your customer is uncomfortable and unsure. There may be something they are worried about. So if you spot them touching their face, it's worth asking them if they have any questions or concerns.

When you go to a meeting, think about how you need the people there to feel. Things like posture, tone of voice and even speed of talking can be used to motivate people. The average speed of talking is 140 words a minute - talking at 240 words a minute can be like a verbal espresso to the listeners. Speaking slowly can suggest weightiness but it can also leave the listener feeling sluggish.

Networking is about staying focused on the person you are talking to while allowing others to join the conversation. Use palms-up gestures to encourage questioning and don't stand directly opposite someone, as that can be intimidating. By standing slightly to one side, others can join you and when the time is right, you can move away more easily.

Three great ways to use the back of your business card
How I use face to face networking to promote my business
What's your personal brand?

Reach new customers and boost sales with our free guide to getting started in digital advertising.