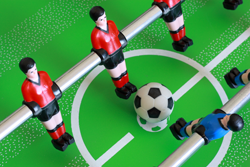 Big companies have staff, resources and budgets that small firms can only dream of. So how do you compete against bigger rivals when you are a small firm? And can you really level the playing field? Ben Dyer, formerly of ecommerce specialist SellerDeck, argues that small businesses can get the upper hand

I spend a lot of time talking to small business owners. The most successful ones all have something in common: the in-built determination to be more successful than the competition. However, the biggest problem for small businesses is resource. How can they possibly have the means to compete with the bigger brands? Is it even possible to level the playing field?

One of the best ways to get an advantage over the bigger players is to use their marketing budget against them. Get the competition to pay for increasing the footfall into your store or unique visitors to your ecommerce site. While this may sound difficult and even nefarious, there's at least one easy technique that is completely above board.

Huge brands spend millions of pounds each year on product positioning, celebrity endorsement, slogans, PR and advertising. To take advantage of this, first you need to carry out some research. Spend time monitoring your competitors - sign up to their mailing lists, read their blogs, look out for ads they are placing and keep an eye on their website for important news updates.

If this all sounds too time consuming, Google Alerts allows you to specify search terms, set the update frequency and sit back for news to arrive straight to your inbox. Why not try to set up searches for brands, people and products in your space?

The idea is to use your size to act quickly, be reactive and work to position a proportion of your offering to be complementary.

An interesting example of how this can be achieved came from the Conservative Party in the run-up to the 2010 election. In April 2010, Alistair Darling made his last budget speech before the election in May. To benefit from the speech themselves, the Conservative Party bought Google Adwords for key words and phrases which were activated in real-time as the budget was being delivered. A search for 'child care' or 'pensions' during this period would return a top sponsored link to the Conservative website. That way, Darling's speech was driving traffic into the Tories' camp.

Be a 'fast follower'

However, it's important to remember that sometimes, big brands make big mistakes. As a small business it can be easy to follow blindly, believing that the big guys are always right. But often it doesn't pay to be first. Some of the most successful businesses have been formed by entrepreneurs that have learnt from the mistakes of others. It can pay to sit back and let the competition make the initial mistakes.

The best example is Google; there were hundreds of search engines before Google arrived and some were sponsored by companies much larger than Google. Google looked at the market, then the needs of customers and devised something that met those needs more effectively. Particularly when entering new markets, large companies are often unable to behave like a new dog that must learn new tricks. That's the opportunity.

Have a better focus

While a great product often sells itself, getting the message out can be difficult for small businesses, and it's not all about ad spend. Larger brands often have advocates, because as humans we like to associate ourselves with the things we like. For example, I love Starbucks and it would be very hard for someone selling a similar product to market to me. To make matters worse for the competition I am also a Starbucks' advocate. Nothing sells a product better than a personal recommendation.

When Dietrich Mateschitz founded his little known Red Bull energy drink, he faced a problem. While there was little competition he struggled for traction, as consumers didn't know if Red Bull was a soft drink or a sports tonic, so sales were slow. To overcome this problem, Red Bull went back to basics. They identified a core market and focused on selling directly to them. For Red Bull, this was the student market.

Ask any student today what their favourite energy drink is, and I bet Red Bull is at the very top of that list. The reason for the devotion is less to do with the product but more to do with the brand; Red Bull spent time sponsoring student events, they started small and slowly built a following. By having feet on the ground, they were reaching segments of the market their competition couldn't. Now Red Bull is involved in Formula One motor racing, the Red Bull Air Race and various other sports. This is a classic example of a small company beating their larger rivals by being more focused.

Being a small business can be challenging. But while we often don't always have the resources to follow our big named competitors we do have the ability to be agile, and that often makes all the difference.

The smarter way to do ecommerce

Selling on Amazon, eBay, or Etsy? Work smarter not harder - respond to queries from all your channels in one place with eDesk.

The smarter way to do ecommerce