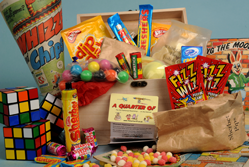 Remember Wham Bars, Fruit Salads, Mojos, Space Dust and Refreshers? With his business A Quarter Of, Michael Parker has recreated an old-fashioned sweet shop online, selling more than 600 varieties to satisfy the demand for retro sweets

Selling sweets by the quarter and with illustrations inspired by the classic comic Whizzer and Chips, online sweetshop A Quarter Of was established in 2002 to recreate the sweetshops of the sixties, seventies and eighties.

The brainchild of owner Michael Parker, A Quarter Of has grown rapidly in line with demand for retro sweets. "I wanted to create something I would enjoy doing. I hadn't got a clue it would take off like this," says Michael.

The inspiration for the business came when Michael and his brother were in the pub, reminiscing about the sweets they used to buy from their local sweetshop. Michael did some research and discovered that some of the old sweets were still being made.

The result is a website offering more than 600 varieties of sweets that's full of nostalgia and fun. "It's entertaining and a bit tongue in cheek," says Michael. "People can spend fifteen minutes on the site without necessarily buying anything and that's fine."

But customers are buying and the business is growing fast. In the run-up to Christmas, staff numbers swell to about 35 as they dispatch three tons of sweets a day. And that's just to individuals. Michael has also set up a wholesale business to meet the demand from retailers. "We have a 10,000 square foot warehouse and we're looking for a new place twice the size."

The power of PR

Michael's marketing strategy has clearly paid off. "We had a three-pronged approach to marketing right from the start, focusing on word of mouth, PR and search engine optimisation. Word of mouth is the most important. Happy customers bring in more customers," says Michael.

In addition, PR has brought A Quarter Of to the attention of millions of potential customers. "I always thought traditional page advertising wouldn't work for our business and focused more on the PR side. And it has worked exceptionally well," says Michael. "I have done about 90 radio interviews and we have had a full page in the Sun, three pages in the Daily Telegraph's Saturday Magazine, plus a page in the Daily Mail and coverage in the Times."

And that's not all. Michael has appeared on Sky News twice and was also a guest on ITV's This Morning.

The nostalgia factor has allowed A Quarter Of to build strong online communities, with a loyal following on both Facebook and Twitter. Says Michael: "We use every way possible of communicating with people and let them choose how they want to communicate with us."

Much of the company's growth has been driven by customer demand. For instance, demand for wedding favours has opened up a whole new market. A Quarter Of also gets enquiries about sweets that people remember from their youth. When Nestle relaunched Texan bars (a chocolate-covered toffee bar from the seventies, advertised by a cowboy with the line, "Sure is a mighty chew") as a limited edition in 2005, A Quarter Of sold 20,000 in just six weeks.

"We're fortunate that weren't hit by the credit crunch," says Michael. "When times aren't so good, people look for inexpensive treats. Nostalgia never seems to go out of fashion. We couldn't stand still if we tried."

You could have finished that project by now. Get used to getting to the finish line faster with expert freelancers by your side.