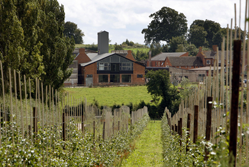 Will Chase is a potato farmer with a difference. He started the gourmet snack brand Tyrrells Crisps in 2001 and since 2008 he has been making vodka from potatoes. His vodka brand, Chase, was named the world's best vodka in 2010 and is now stocked by premium shopping emporiums including Harvey Nicholls. Rachel Miller reports

Will Chase is not your average potato farmer. He started Tyrrell's Potato Chips in 2001 and went on to sell the highly successful brand in 2008. Now his latest project has brought him global recognition.

Will has created a premium vodka - Chase - which is so special that it took first prize at the 2010 San Francisco World Spirits Competition. In a blind tasting by 30 independent judges, Chase Vodka came first, beating 249 others - including leading vodkas from Russia and Poland.

Unlike its rivals, Chase Vodka is not made in a large commercial distillery. Instead, it is made on a farm in Herefordshire. And, unlike most vodkas, it's made from potatoes rather than grain.

So how did a potato farmer come to produce a premium vodka? "I wouldn't have gone into spirits if I hadn't made the crisps first," says Will. "With the vodka, I've been able to use all the things I've learned from Tyrrell's, including marketing and PR."

Will started making crisps when he was selling potatoes to big supermarkets and food producers. "As well as selling my own potatoes, I was buying potatoes from other farmers and selling them on," he explains. "One day, I had a load of potatoes rejected by McCain. But I soon found that Kettle Chips wanted to buy them."

Will realised that there was an opportunity to turn a cheap product – potatoes – into a highly-priced product like crisps. Tyrrell's Potato Chips were positioned as gourmet, hand-made crisps and were sold in carefully selected outlets - upmarket delicatessens, gastro-pubs and stores like Fortnum & Mason, Selfridges and Harrods. Indeed, in 2006, Will even took legal action to stop Tesco from stocking his crisps.

However, as Tyrrell's got bigger and bigger, "it wasn't unique and quirky anymore" says Will. By the time he sold the brand, he had already started making vodka at his farm using his own potatoes.

Initially, Will knew nothing about vodka - "Before I would have said vodka's vodka, but now I know different". He found a small German firm that manufactured distilleries. "Part of our success comes from our choice of equipment. These guys are replicating old traditional stills made from copper. We also use a rectifying column that distils the vodka 50 times. Because of that we don't need to filter it. It is such high quality."

However, Will soon discovered that you do need a lot of spuds to make vodka. "The first time we made some vodka, we mashed up 20 tons of potatoes and got a few litres of vodka out of it. I was amazed."

Chase Distillery was been producing about 1,000 bottles a week of the £30 a bottle premium vodka. But since winning the award, demand has soared and Will has had to increase production substantially.

"Winning the award has been fantastic," he says. "It means our product has been endorsed - it's the best in the world."

The effect of the publicity surrounding the award has been dramatic. Online sales of the vodka are typically about 100 bottles a week (more are sold through retailers). However, when the BBC covered the story, Chase Distillery received 1,000 online orders in just one day.

"The award has really helped to build up the brand's profile, which is vital," says Will. "You can have the best product in the world, but it won't sell if the brand isn't strong."

Will excels at giving his brands a strong identity and using his own personality to sell to retailers. ""When I started the crisp company, I didn't spend any money on advertising," he says. "Instead it was just me and what I knew was a great product visiting hundreds of little independent stores. So essentially I was the brand, and I was friendly and enthusiastic. Branding is everything. A brand is like a baby that grows up, it develops a personality." 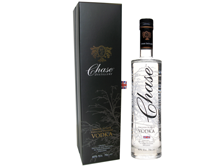 Now he's taking that enthusiastic approach and spreading the word about Chase Vodka. "It's a very different world," he says. "I thought people would be interested in the provenance and the fact that we grow the potatoes and make the vodka here on the farm but what has really captured people's interest is the Englishness in a market dominated by Russian and Polish vodka."

The most important people to win over are retailers, says Will. "We had to get retailers on board. So we had to get the quality wine merchants and people like Waitrose to taste the vodka."

At the same time, Will is having to educate the market and persuade consumers to try an upmarket vodka like Chase. "In bars people now tend to ask for their spirit by name. Our target market is mid-20s to mid-50s, people who want to buy something that's high-quality, smart and savvy."

Will is using a number of ways to reach consumers, including attending big sporting events like Wimbledon and Cheltenham Races. He is also exploring the potential of social media. "We want to grow on Facebook but we don't want to be cheap or tacky. But at the same time, we don't want to be pretentious either."

Not surprisingly, Will has more ideas in the pipeline. "We are making our own gin," he reveals. "Gin is actually made out of vodka but we are not using our potato vodka - which is a bit strong - we're using an apple based vodka as the base." Other developments include liqueurs using local elderflower and raspberries and limited edition vodkas such as an oak smoked version and a marmalade vodka.

"Big companies can't do things like this," says Will. "They have to have 50 meetings first. We can have an idea and get a new drink out in a few weeks."

Find a freelancer that fits your needs