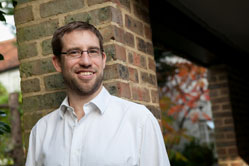 Even the most seasoned networkers get butterflies when they walk into a room full of people. Charlie Lawson heads BNI, the UK's biggest networking referral organisation. And yet he too finds networking difficult, as he has revealed in his book, The Unnatural Networker. But Charlie also knows, better than anyone, how to overcome those fears

When it comes to the things that make us nervous in business, walking into a room full of strangers is up there with public speaking for many of us. And yet, when we are networking, we often look around and think that we are the only ones with sweaty palms.

For Charlie Lawson, that moment happened right at the start of his career when he was working for a wine company. "My colleague Nicola and I went to a networking event," he says. "I considered her to be the ultimate networker at the time. She talked to every single person in the room. It freaked me out. The thought of going up to someone terrified me."

Those nerves haven't completely left Charlie. But he has developed a clear understanding of what networking actually is and how to make it work.

"I still don't find it particularly comfortable," he admits. "And yet I run the UK's biggest networking referral organisation. Even as a seasoned networker, I have to pluck up the courage to walk into the room. But I now understand how to do it and what approaches work."

It can be particularly challenging for introverts, he says. "Introverts tend to like their own company," says Charlie. "Every conversation is a new environment for them. I, for one, have to get out of my comfort zone to get into that conversation. But once I am there, it becomes comfortable. So then I don't want to move on."

But this is actually a good thing, he says. "People like me tend to talk to people for longer. This means we're more likely to find common ground and build relationships. Being a social butterfly and working the room may not be the best approach."

There are others who come on too strong when networking. "I recently went to an early morning networking session and at 6.50am I had a guy come up to me trying to sell me something. Even if your product is so simple that people can sign up right there it's not appropriate in a networking environment. No-one goes to networking events with the intention of buying, so why would you go to sell?"

So what's the best way to approach networking - right from that gut-wrenching moment when you walk into the room?

You can also look for what Charlie calls the "low-hanging fruit", those people that are standing on their own. "You often see people lurking around the buffet but they want to be approached. Help them out, they are looking to talk to someone."

Then what? "It's simple," he says. "Just introduce yourself and say, 'do you mind if I join you?'. Remember they are there to network too."

It can be tempting to put on a new persona along with a brave face but this is not advisable, says Charlie. "Be yourself, otherwise you'll never be able to keep up the façade. Don't worry about the nerves, people will see you as a real person and that's what counts."

Overcoming your anxieties will help you network but if you're there to get results, you also need a strategy. And the bottom line is that you are there to make useful connections. The question is, how do you know who is going to be useful?

"You've got to keep talking to people to find out if they, or someone they know, are the type of people who could move your business forward, those that have good contacts and who could potentially bring you a stream of referrals," says Charlie. "You'll doubtless meet many more other people who can't necessarily help you - but these contacts are still useful as they could lead to referrals down the line. Above all, what you are looking for is the warmed-up introduction that allows you to make contact after the event."

Of course, there are also the "people that bore you senseless with their life story, those people that spend the whole time looking over your shoulder," says Charlie. But until you start talking to people, you won't know who's going to be useful or how.

More often than not, it's not your new contact that can really help you but the people they know. So you need to build strong relationships that will encourage referrals at a later date.

"It's the difference between hunting and farming," says Charlie. "It takes time to build up. If you keep helping people then someone else will eventually return the favour."

It's also about keeping an open mind. "At a recent BNI workshop we were doing a networking exercise and I was asking everyone who would be their dream referral. There was one guy who just wasn't convinced. But eventually he said the person he most wanted to meet was the marketing manager of Hilton Hotels. Another chap immediately said, 'I live next door to the chairman of Hilton Hotels, is that any good to you?'."

It just goes to show that setting goals for networking can pay off. But this is a long-term process. You can't plan to meet a specific number of useful contacts at one event because you just don't know who will be there. In the short-term, effective networking is about casting your net as widely as possible.

Charlie sets himself a specific goal at each event he attends. "My goal gets me off my backside and gets me networking - it is simply to meet ten new people," he says. "If you are closed off you just won't make the connections, synergies can come in funny ways."

Written with expert input from Charlie Lawson of BNI.

Benefit from networking
Improve your soft skills for better networking
What should you include in a professional profile?

Power up your business with Square

Square POS is trusted by more than two million businesses. Easy to use and with no hidden costs - from card readers to POS kits.

Freelancer confidence rises in spite of challenges
Poll finds many small firms think MTD does not apply to them
As the going gets tough, shoppers rally around small firms
New push for faster SME payments as costs soar

Power up your business with Square